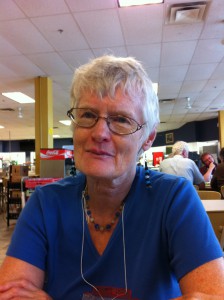 Margaret Slavin arrived early for the pre-gathering retreat after many tiring hours of travel.  Over lunch on Sunday, she shared with me reflections on her experience of the silent retreat:

“To be plunged into profound silence became quickly very challenging.  There was little instruction, but some excellent quotations provided.  They underlined for me that this is the core of the Quaker experience – just plunge into it.

I came away with the reminder that there is a silent place beyond what you think is your silent space.  It was also a reminder that it isn’t necessarily a comfortable place.

I’ve had the experience before where, when I slowed down, lots of creativity bubbled up, an idea for a poem or a story – and I thought that was great.  Instead this time, I felt just emptiness.  I realized I was much more tired than I had thought or felt I was, and others said the same thing. I did sleep then, for a long time.

I wonder how often we are overriding our true leading, if we’re not taking care of ourselves, we wind up not being able to respond to leadings.

The task we were given was profoundly counter-intuitive.  We were asked to be silent, though Friends we hadn’t seen for a long time were arriving from all over the country.  What was in my heart was different that what I was being asked to do.  This has not been my usual experience with Friends.  Usually they flow together – the heart and the task. It was suggested that it was OK for us to talk with others, only if we could say that which would deepen the silence.

I understood that we were being reminded of an essential Quaker discipline and I did get reminded of that, and that’s good.

This challenge made me aware that I had nothing to say that would deepen the silence.  I was feeling alarmed and empty towards the end.  I had nothing to say. The bare table in front of us seemed to represent that emptiness. I needed an image.  I took my blue scarf, wound it around two bright red copies of Advices and Queries, added some dried, curled up leaves and a dried rose I had found in with the leaves.

When I sat again and looked at it, the rose stood out for me.  It had been discarded where I found it, not in its natural setting.  Looking at it, I knew that Spirit for me manifests most unmistakably in my relationship to people.  I needed the image to see that.”