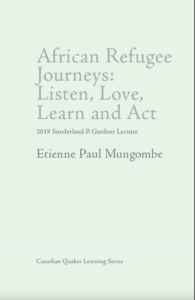 “African Refugee Journeys: Listen, Love, Learn and Act” by Etienne Paul Mungombe was the 2019 Sunderland P. Gardner Lecture, presented at the Gathering of the Canadian Yearly Meeting of the Religious Society of Friends, on August 4, 2019, at Canadian Mennonite University in Winnipeg, Manitoba.

Etienne Paul Mungombe is a birthright Friend from Uvira, in the Democratic Republic of Congo. Paul was forced to flee to Tanzania as a refugee in 1996 due to the First and Second Congo War. In the refugee camp, he completed theological training and was ordained as a Friends Church pastor.

In 2008 Paul’s family was moved by the United Nations High Commission for Refugees (UNHCR) to Kakuma refugee camp in Kenya, where he started and pastored Kakuma Friends Church. While in Kakuma Paul completed training in peace making, Healing and Rebuilding our Community (HROC, an Alternatives to Violence program) and other de-traumatization education, and led workshops to support refugees and displaced people recover from trauma. Paul completed his teaching diploma and started studies through Friends Theological College in Kenya. In 2012 Paul helped to create Hope and Voice for Disabled People, a community based organization in Kenya that does peace work through games and workshops.

In 2016 Paul and his family were offered refugee settlement in Canada. They arrived in July 2016. Since then Paul has established a Friends Church in Montreal and is associated with Montreal Monthly Meeting. With other refugee Pastors Paul has been involved with founding Union des Églises des Amis/United Friends Churches (UFC) in Quebec.

Discerning Peace & Social ConcernsPraying Through the Bars
Scroll to top