News
You are here: Home1 / News2 / News3 / Our past can help shape our future: The Canadian Friends Historical As...

Quakers have often been ambiguous about honouring historical figures.  Plain language made sure that no honour was paid to leaders in the community; everyone got the informal ‘thee’ or ‘thou.’  There was no tangible honour paid to a dead leader in the community.  The gravestone of an important man or woman was exactly like the gravestone of the humblest member of the community. No inspiration was taken from historical records of great leaders.  Pre-Fox Church leaders had largely gotten it wrong, so their record was not worth looking at. Not even leaders in the Bible were noted as examples meant to inspire us.   To the extent that history is often the record of battles fought and battles won, there was little interest in keeping these records in the Society of Friends.  One’s inspiration was to come from the Inner Light, not the dark past.

On the other hand, the Quaker life is not merely an inner experience.  If the Inner Light is given its proper place in the life of a Quaker, it will show through in the testimonies.   These testimonies will shape the life of the Friend, and shape the place where he/she lives, works and plays. Looking into the history of Quakers as individuals and as communities will reveal the cultural impact of their testimonies, and give us examples today of how we can apply the testimonies to make this world a better place, and bring it  closer to the Kingdom of Peace. 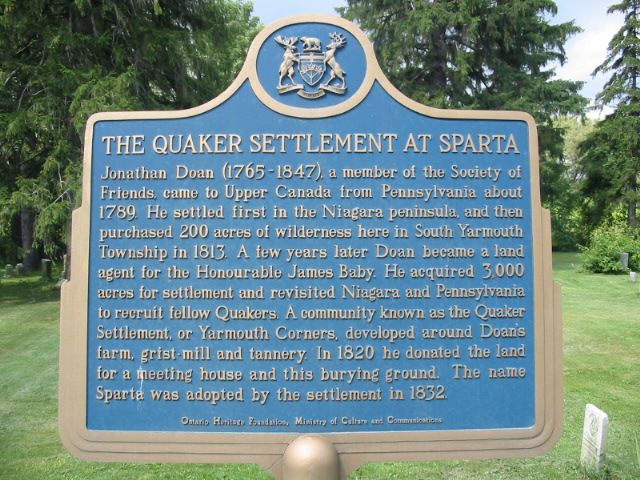 We all know about the impact of the Quakers on the slave trade, but there are many other examples of how the Quaker ideals shaped local realities, and the knowledge of them is worth preserving. For example, Fair Trade is a popular expression today of the testimonies of integrity and stewardship, amongst others. Did you know that a Quaker teacher named Elias Hicks was preaching Fair Trade in the 1820’s?  Even as he lay dying, he resisted the use of a cotton sheet to keep him warm because the cotton industry was tainted by slavery.  Maybe you knew that the first women’s rights convention in North America was convened in 1848 by five women, four of whom were Quaker.  A number of Canadian settlements were founded by Quakers. In Ontario alone, there are the examples of Lloydtown, Newmarket, Norwich, Pelham, Pickering, Schomberg and Whitchurch. Nicholas Austin founded Austin, Quebec. When the Quakers came to existing settlements, their sense of conviction and purpose often mobilized the earlier settlers to build the first local school house, meeting house, and saw mill. Timothy Rogers founded both Newmarket and Pickering and his descendants founded Rogers Telecommunications Inc. The first woman principal of a public school in Ontario who went on to become Canada’s first woman doctor, Emily Stowe, was a Quaker.  Crop scientist Charles Zavitz developed a strain of barley that dominated Canadian agriculture for 38 years but he refused any public accolades from the Canadian brewing industry.  Quakers have enhanced many aspects of Canadian life.

In Canada, there is a group of Friends and friends who have been active since 1972 in collecting and publishing the historical impact of Quakers. The Canadian Friends Historical Association (CFHA) is responsible for two publications, a monthly newsletter and an annual journal,  and one annual conference in September.  On top of that, it has three projects on the go.  The oldest project is the Built Heritage Register. The purpose of this register is to document, recognize and, if possible, preserve Quaker-built heritage in Canada. Another project is the Family History Project. According to the CFHA website  “the Canadian Quaker Family History Project seeks to document the lives and experiences of the thousands of descendants of Quaker settlers from the 18th century onwards.  A more recent project has been the Transcription of Minute books and Registers of the Nine Partners Meeting in Millbrook, New York which contain many references to Canadian Friends. Another project being discussed might take the form of a Quakerpedia and be made up of an open directory to collect in one, easily accessible place a list of Quakers in Canada who have made a difference in their communities by their faithfulness to living out the Quaker testimonies.

If this blog entry has sparked an interest in you to help with maintain the historic Quaker testimony in Canada, please contact the CFHA through www.cfha.info.

Call to Conscience – Quaker experiences in facing the challenge of climate...Apply by April 1! Youth and Militarism Conference – April 24-26th, 2015
Scroll to top