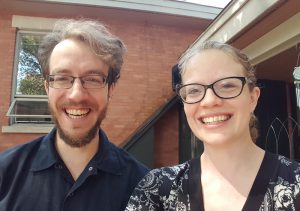 Timothy is an attender of Ottawa Monthly Meeting and brings rich experience to the role (more on that below). In his one-year contract as editor, Timothy will be responsible for producing The Canadian Friend and uploading content to the Quaker.ca website.

Timothy will begin on September 18, although he has already begun to get oriented to the role. He will have a period of overlap with the existing editor, Reykia Fick. Timothy and Reykia will work together on the fall issue of The Canadian Friend (deadline for submissions: September 25).

My name is Timothy Kitz, and I’m excited to come onboard as the CYM Editor. I see both The Canadian Friend and quaker.ca as forums where Canadian Friends can discern what the Spirit is saying today, and as practical means by which we can knit ourselves together as a community across a vast geography. That’s important work; please help me as I help it happen.

As for who I am, to start with, I’ve been an attender of Ottawa Monthly Meeting for about six years, with a few months at Toronto Monthly Meeting before that. A visit to the Worship Group at the Possibility Alliance in Missouri – a permaculture community living joyfully without petroleum and electricity – was my first crucial contact with Quakers.

I grew up in and have spent most of my life in the Kitchissippi watershed, the traditional territory of the Algonquin Nation. I’ve worked and volunteered with several non-profits, which has seen me working with people with intellectual and physical disabilities, as well as homeless and Indigenous folks. I’ve also been part of three intentional communities.

More recently, I’ve failed as a market gardener and have decided to focus on playing with words – AKA, free-lance editing, something I’ve done on the side for four years. I’m a big music nerd and I make experimental comics for fun. I’m at least as inspired by Socrates, anarchism, and the Dao de Jing as I am by Jesus of Nazareth and John Woolman.

Submissions? Web posts? Comments / questions / suggestions? You can reach Reykia or Timothy at .