I have been out of Internet contact for a while. Rather than go deep in this post, I am going to go broad and give a taste of the many things I have experienced here.

Each morning we have a plenary worship, led by a different part of the world. The sermon given by Churchill, from Kenya, was especially moving. He spoke about creating connection by overcoming individualism and opening up space in our hearts, our homes, our churches, our communities and our countries. He brought to life passages in the Bible, and told contemporary stories. One of the most moving for me was about a bus of Christians and Muslims that was hijacked by Boca Haram, the Islamist terror group responsible for so many massacres of non-Muslims. When the gunmen tried to separate the Christians from the Muslims, the Muslims refused, saying the gunmen could either murder everyone on the bus, or none at all. And the gunmen retreated. 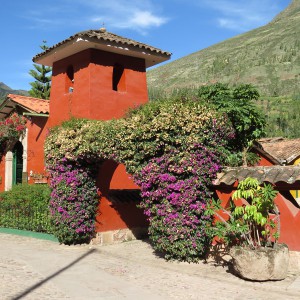 I attended a variety of workshops and consultations. The consultation I chose, which continued for four sessions, was about how we create active, vital Quaker communities. I only attended the first, because I needed time to work on this blog. But it was much richer than I expected.

A Quaker historian living in Germany outlined a research project she is undertaking about the untold story of the remarkably large number of Jews who were saved and then assisted by Quakers, in spite of Quakers’ relatively small numbers.

Another workshop outlined the sometimes-violent modern history of Kenya and the work of Quakers to build the structures necessary to foster a peaceful civil society. It again struck me that our pantheon of Quaker “saints” does not include those who are doing work in Africa and other places that is as courageous, spirit-filled, and inspiring as John Woolman or anyone else. We really need to learn about and acknowledge this broader Quaker history, for these are our brothers and sisters, acting out the peace testimony and circumstances that are more challenging than we can imagine.

I have heard great things about the Bible study, led by Janet Ross from Britain, who was my co-leader of our home group in Kenya. But I have chosen to attend the early-morning silent worship, which has been very rich. One man spoke about a recent report by Oxfam that 1% of the world’s people now own 50% of the wealth. He compared the story of Nicodemus, one of the 1%, who came to Jesus secretly to be taught, and the story of the unclean woman who touched Jesus’ robe, one of the 99%. He compared this to people in the gathering including people like himself, who might be part of the 1%, with the others from poorer parts of the world, who are part of the 99%. And referring back to the comment of Simon Lamb in our opening session, he said that the poor and disadvantaged, coming from chaotic and sometimes desperate circumstances, often embrace the Truth with a revolutionary gusto. Whereas for those in comfortable and advantages circumstances, the Truth can come over a longer period of time as a gentle, transformative rain. But the end product in both cases is inner peace. 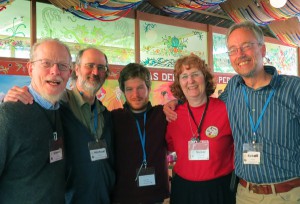 The conversation I had with three others at the first breakfast was so wonderful that we agreed to form a “breakfast club,” and we have been meeting to eat together and talk every morning. It’s my second “home group.” (We have offered “open spaces” to several others, especially if they bring us mangoes.)

As it turns out, three of us have some sort of geology background, and a discussion with a dear Nepalese Friend of the recent earthquake that wreaked such havoc on the lives of him and his people, got us started talking about the plate tectonics, the origin of the universe, natural catastrophes and apocalyptic beliefs. It was a very animated discussion. I referred back to my exchange about the origin of mountains with the Peruvian pastor. (See previous post.) I picked up my coffee cup and said that when I see with my own eyes that it is purple, part of my faithfulness is honouring that truth. When I see the evidence about plate tectonics, I simply cannot ignore it. If it conflicts with my religious beliefs, then I need to figure out how to integrate those two systems of thought.

Our Nepalese Friend responded to this discussion by saying that Jesus exhorted us to become like children again, and that to him this meant maintaining a simple, strong faith in the words of God as revealed in the Bible. To get confused by all these other ideas would only distract him from the central purpose of his life to be loving and peaceful in the name of Jesus. We all walked away to the rest of our day not having changed each other’s beliefs, but certainly understanding each other a bit better. In other words, being in unity not in our heads, but in our hearts.

Regarding business, FWCC, like so many service-related organizations, is struggling financially. It is the Europe and Middle East Section that contributes about half the funds, and funds from the US are projected to decline. We considered the frequency of the plenary gathering, which are hugely expensive, and made changes to the constitution that are related to this frequency (every ten years minimum, hopefully between six and eight years), and how to govern the organization in a way that is appropriate to its shrinking resources of time, money and staff. We have hired Michael Wajda to review our fundraising practices and make recommendations.

A lot of time was spent drafting recommendations on how individuals and Meetings can help combat climate changes. I will pass these on to Meetings as soon as I receive them. 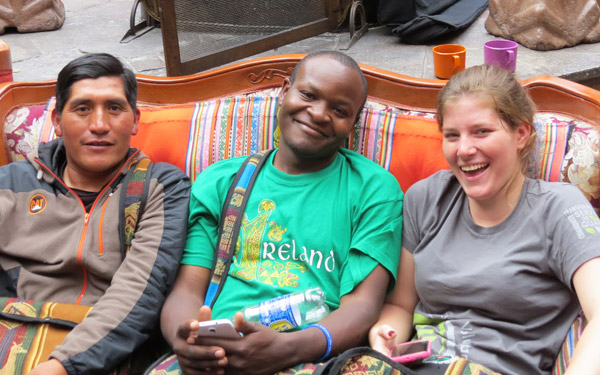