I have had conversation after conversation here that have touched me deeply and will leave me changed in various ways when I leave. But I would like to relate a personal incident that happened that maybe characterizes the challenges that can be part of the FWCC experience.

Yesterday morning, I was in our home group, which is composed of a dozen people or so from all around the world, and from a broad spectrum of traditions. I mentioned about how deeply I had been affected growing up near the incredible beauty of the Rocky Mountains. I still felt stunned the day before by the magnificence of the landscapes we had passed through on our tour of the Sacred Valley. 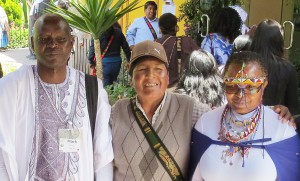 I spoke about reflecting why these mountains are here. I described a vast mass of heavier rock stretching out below the Pacific, being pushed under the lighter rock of the South American continent, causing it to crumple up and then be carved into valleys by the rivers born from the precipitation that is forced to fall over the higher land as the air passes over. And what fuels the movement of this vast mass of rock? Residual radiation from elements cooked up the oven of an exploding star billions of years ago, heating the earth’s core, causing the molten rock to circulate up towards the surface. I said that this is utterly remarkable, and that if this was not a revelation of the creativity of the Divine, what is?

Immediately, a Bolivian pastor talked about how these mountains are here because of the Biblical Flood, and the talked about false teachers doing the work of the devil by leading the people away from the Bible which is the source of truth.

At first, I did not take it personally, knowing he was just speaking his own truth. But as the minutes passed, my heart grew heavier, and I had to speak. I said that I understood our intent in coming together was to create a safe home base by listening to each other, not telling each other how we are wrong or sinful. I told him I knew that he was speaking from a place of love, and from a sense of devotion to something that was very dear to him. I said that I did not know what his intent was, but that his words gave me the message that I was doing the work of the devil and that this gave me a very heavy heart 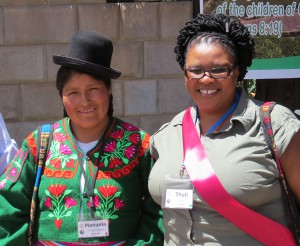 To close the session, I asked him to lead us in a prayer, which he did, and afterwards I thanked him for listening to my difficult words. I checked with others afterwards, and they assured me that what I said came across in a loving and non-accusatory way.

I was afterwards gently eldered by someone who talked about learning to just accept the Evangelical Latin American Friends where they are at—in other words, to not respond. But I wondered whether we lose an opportunity to build connection when we hide our own truth by assuming someone else is incapable of hearing it? I felt no anger towards him. I had no stake in making him feel bad. I was feeling hurt, and rather than pretending to be okay, and perhaps then feeling separated from him because of that hurt, I wanted to let him know what was really going on with me.

I saw him a little later near the lunch line, and we talked in a very friendly tone about how nice the pool was. And every time we have crossed paths, it’s been with a sincerely warm greeting.

I don’t know exactly what was in his head and heart when he spoke those words. I was not paying attention to how my response was translated to him and I don’t know how he understood it. And I cannot underestimate the vast gulf between our backgrounds. For him to be part of this kind of circle, and for me to speak to him the way I did, may have been very foreign to his experience.

I have included pictures of people of the conference (none of whom are in my home group). 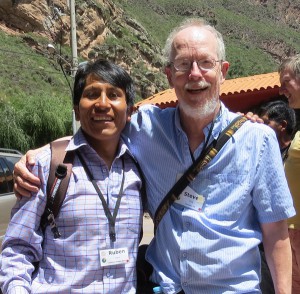