Young Friends and Young Adult Friends (13-35 age range) gathered this summer at Camp NeeKauNis for a weekend of fellowship and fun. The following is their epistle.

The gathered Young Friends ask this epistle be read during announcements after Meeting For Worship. 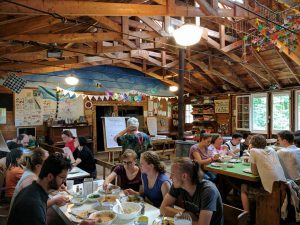 From 29th Sixth Month to 2nd Seventh Month 2017, around 30 Young Friends from across the country gathered at Camp NeeKauNis in Waubaushene, Ontario for a Canadian Young Friends Gathering.

This gathering was organized to bring together a critical mass of Young Friends and Young Adult Friends in order to energize and strengthen our community and rejoice in our time together in worship, play, and good conversation. This gathering was planned in part so that Canadian Young Friends and Young Adult Friends had an occasion to gather while the wider Canadian Yearly Meeting sessions were holding a fallow year, and also as a pre-retreat for the Friends General Conference Gathering happening in Niagara Falls, New York.

Along with meals together, work around the camp, and daily meeting for worship, the organizers left space for Friends to offer self-directed programs as they desired. These smaller sessions sprung from the amazing diversity of gifts Friends wanted to share, from the gentle art of cat’s cradle to discussions of the role of Christ in our lives and in Quakerism; from canoeing at sunset, to the plenary workshop on the surprisingly recent history of Christian homophobia and transphobia.

Several Friends noted this year’s gathering at Camp NeeKauNis was the largest gathering of Canadian Young Friends in some years. This is with great thanks to the committee (Rachel Urban-Shipley, Jonah Egan-Pimblett, Misia Robins, David Summerhays, Jessica Klaassen-Wright and Christina Tellez) who organised and promoted the gathering, especially the leadership of Jessica and Christina before and during the event. 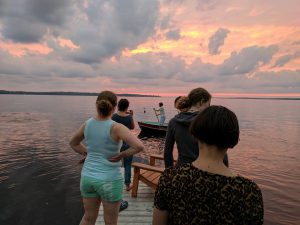 We are also deeply grateful for the support of Education and Outreach for assisting with funding for the gathering, particularly as travel costs are often a barrier for Young Friends who wish to attend. In the midst of this gathering, Friends also felt led to discuss the future of Canadian Young Friends Yearly Meeting and its relationship with Canadian Yearly Meeting.

We are excited about re-kindling the enthusiasm and spirit in Young Friends by growing our connections with each other, both through media and regular gatherings. The gathered Young Friends recognise the role effective communication provides in building and maintaining community.

Gatherings are a crucial component in maintaining and strengthening the dispersed community of Canadian Young Friends. Those of us present felt a desire to maintain and increase these gatherings. Recognising this, we encourage all Young Friends who are able to attend Canadian Yearly Meeting in Barrie in 2018.

Moving toward Canadian Yearly Meeting in session 2018 in Barrie, we discerned the following steps should be taken over the next year to strengthen the national community of Young Friends and to engage more meaningfully with the wider body of Friends in Canada:

These contacts will work with Canadian Yearly Meeting staff to facilitate this initiative.

As we build our community, including through further gatherings, we request the continued support of Yearly Meeting’s Education and Outreach Committee. The challenges of holding gatherings are amplified for Young Friends. We are grateful for the support of all those in Canadian Yearly Meeting in dealing with those challenges and in helping us strengthen our common community.