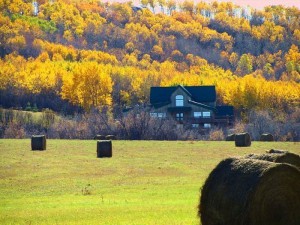 On Thanksgiving weekend, a group of about forty Friends gathered at Shekinah, near Saskatoon.

In addition to Friends from Western Canada, we were excited to welcome a visiting Evangelical Quaker pastor from Burundi. She is the Coordinator of the Friends Women’s Association (FWA) in Burundi, and she spoke on Saturday evening about the country’s recent history and the work of the FWA.*

On Friday, as people arrived, we gathered downstairs and ate the delicious food generously supplied by members of Saskatoon and Prairie Monthly Meetings. We enjoyed an activity in which we paired up and drew our partners without looking at the paper – a challenging but ultimately amusing task! We then learned interesting facts about our partners and wrote them side by side with the portraits.

At Saturday’s Meeting for Worship for Business, we heard the joyful news that two Friends had become engaged that morning.

Saturday was a beautiful warm day, perfect for the popular Flying Fox zip line. Friends young and old put on helmets, hooked up their harnesses, and flew across the small valley and back. More cautious Friends watched and cheered.

Later on Saturday afternoon, we were able to choose between two Special Interest Groups: Quakers in a re-tribalized world; or the feasibility of continuing to meet at Shekinah.

Saturday evening was clear, providing an amazing view of the stars that can only be found in the country. Coyotes yipped as we gathered to watch a white aurora borealis veil the northern sky.

On Sunday afternoon, our guest from Burundi offered a SIG that expanded on her Saturday evening talk.

Monday morning, after a short Meeting for Worship, we sang a familiar old song that concludes many such gatherings, and then the new-to-us song we learned from our guest from Burundi during Family Night.

A video of Alastair McIntosh’s Sunderland P Gardner presentation, Decolonizing Land and Soul: A Quaker Testimony, is now available in our Audio & Video section through Vimeo. Or use this direct link.

While he was with us in Charlottetown, Alastair also offered to share the PDF version of his book Island Spirituality, which you can download here.

*This document has been approved for publication at Quaker.ca by the publisher and the author. Please follow the link to the book https://quaker.ca/wp-content/uploads/2015/12/2013-Island-Spirituality-by-Alastair-McIntosh.pdf

Education and Outreach Committee (E&O) is requesting proposals for the development of on-line courses.

E&O has been offering the two courses designed by our former Quaker Education Program Co-ordinator – Introduction to Quakers and Friends’ Ways and Being Peace, Being Quaker. Participants have been suggesting topics for new courses such as: the Quaker testimonies, the mystical foundations of Quakerism, exploring Quaker journals, spiritual resources in Faith and Practice, Christ-centred Quakers, spiritual discernment, Bible passages that form the foundation of Friends’ faith. Perhaps you have another idea! We are asking Canadian Friends to make us a proposal for a course you will develop.

What title will you give your course?

How would you “advertise” it? i.e. Give a short description of the content.

What qualifications do you have for designing it?

How many sessions will your course take at 1.5 to 2 hours per session (we suggest not more than six)?

How many hours will it take for you to design it?

Are you willing to design it for $35 per hour?

When can you do the work? (E&O would like to have it completed between January and March 2016, but can consider later times if necessary.)

Send your proposals to onlinecourse@quaker.ca by December 1, 2015.

Quakers are appalled at the bigotry and discrimination we see targeting the diverse members of the Muslim faith in Canada. We call on all Canadians to stand against this.

We cannot help but think that deeply divisive and harmful political rhetoric is one of the drivers of this growing hostility. We are witnesses to scapegoating of Muslims, which distracts from the many significant issues this country faces. We ask our politicians and news media to take firm stands against Islamophobia, hate, racism, division and inequity.

To retain and strengthen its multicultural identity, Canada needs to increase educational and intercultural dialogue initiatives that will foster understanding and share accurate information about our diverse communities. Like Christians and Jews, most Muslims live by the creeds of the Abrahmic Traditions, which honour peace, love, commitment to God and to creation. These Abrahmic faiths share history, and some fundamental moral and spiritual beliefs.

We support the right of individuals to choose to wear the clothing that they feel is appropriate to them, including the hijab, burka or niqab. Human rights, such as the right to religious expression, are of critical importance. When human rights are taken away for any Canadians, rights are effectively made vulnerable for all. We recognize that the niqab has been worn by some Muslim women in Canada for decades and it is neither new nor a threat. We encourage those who are afraid of the clothing or customs of their Muslim neighbours to remain calm and to examine the real sources of their discomfort.

We equally condemn the conditions of exclusion, injustice and inequality which too often lie at the roots of violence. Services including adequate housing, employment opportunities, and culturally safe mental and other health services, promote feelings of belonging. Quakers support such initiatives for all Canadians, noting that these are among the conditions that result in healthy and peaceful communities.

We acknowledge the responsibilities of the State to ensure security for all who live in Canada.  However, we join with others in profoundly questioning measures taken by Canada which appear to have disproportionately impacted Muslims, Indigenous peoples and people of colour. These have included increasing surveillance, extrajudicial renditions, security certificates, and closing the space for legitimate forms of dissent. As recent and interrelated examples, we are deeply concerned by the flawed “Anti-Terrorism Act” Bill C-51 and changes to Canadian citizenship which has become increasingly restricted through Bill C-24.

We know that there are countless people of all faiths and of no particular faith who seek thoughtful and caring responses to ignorance and violence wherever they appear. We acknowledge with thanks all those who persevere tirelessly for justice and peace and against the marginalization of Muslims or other Canadians. Quakers remain committed to working together with these groups and individuals to put our faith into action.

With hope and in Friendship,

*A Word copy of this letter is available here.

After considerable soul-searching and meetings for discernment, Thousand Islands Monthly Meeting approved a Minute authorizing a group of seven Friends to apply for a family of displaced persons under the sponsorship agreement of the Anglican Diocese of Ontario. We are grateful for this collaboration.  The Meeting is also in communication with the Kingston Unitarian Fellowship and will engage with the immigrant’s faith community as required. Highlights of the Minute follow:

We agree to sponsor an immigrant family and [name] the start up group. They will report regularly and seek further detailed decisions and help as needed.  Because choosing a family to help needs to be done on very short notice, the group is authorized to make this decision without consulting the Meeting further. They are free to add to their numbers as need and opportunity direct.  [Other Friends] offered assistance as able when called on, or promised start-up financial support.

A Friend noted that at the same time we need to pay attention to the root causes of so many families being displaced and resist our country’s military efforts and foreign policies which make the situation worse.”

Further information is available from the Clerk

Submitted at the request of the Meeting by Bert Horwood, Recording Clerk